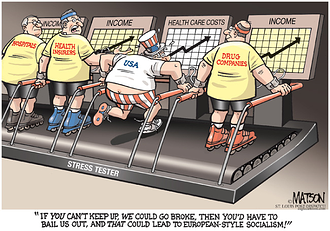 The report also predicts that premiums won’t skyrocket next year as some fear. Insurance companies are no longer allowed to reject people for pre-existing health conditions. The CBO estimated that silver plan premiums are about $3,800 this year, and they expect it to rise "slightly" in 2015 to about $3,900. After that, they expect average premiums on silver plans to go up to $4,400 in 2016 and $6,900 in 2024—about 6% per year from 2016 to 2014. That's about 15% lower than CBO projected in the fall of 2009. A silver plan is the second-highest plan available through the exchanges, and the most popular plan.

The average exchange subsidy will rise from $4,410 this year to $7,170 in 2024, CBO says, helping drive the percentage of nonelderly people covered by health insurance to 92 percent of the population legally residing in the country.

CBO concluded that by 2024 there will still be 31 million uninsured people in the USA, though that figure is 26 million less than had the law not passed. Among the uninsured will be people who decline to buy insurance, unauthorized immigrants, and poor people who choose not to enroll in Medicaid or who live in states that did not expand Medicaid eligibility.

Medicaid adds almost $800 billion in costs over the decade.

Overall, however, the health care law reduces the deficit because of tax hikes, penalties paid by people and businesses that forgo insurance, and curbs on Medicare. CBO says it estimated in July 2012 that, overall, Obamacare would reduce deficits.