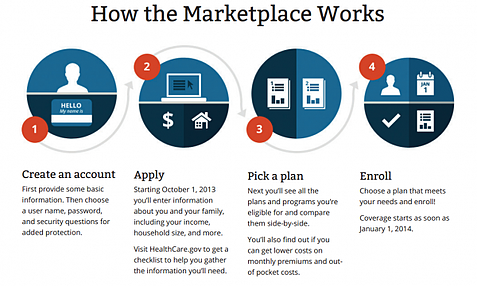 “My instincts told me it was too soon,” said Illingworth, president of Monteith & Company, which has four employees. “I didn’t want to take the risk the first year.”

“I was willing to take a chance,” said Abbate, president of Novitá Communications, with 10 employees.

She is in a distinct minority. New York’s new marketplace covered almost a million people, with about 600,000 people getting Medicaid, 400,000 people getting individual plans and just 10,000 getting employer-based small business plans, through the Small Business Health Options Program, or SHOP.

SHOP is an option set up by the health law catering to workplaces with 50 or fewer employees. It has been slow to get off the ground around the country, with 18 states postponing its full implementation, at least until 2016. California, a much more populous state than New York, has 1.4 million people in its exchange overall, but under 5,000 in its SHOP exchange.

Officials at the New York State of Health say the big push last year and earlier this year has been in the individual market, and they hope to build momentum in the coming months and years for the small-business product.

Illingworth said he could imagine insuring his workers through the state program in a few years time.

“Anytime there’s a sea change in regulation in pretty much anything, experience has taught me that if you can, try and wait to see how it shakes out,” he said.

For Abbate, the risk was worth it. She is paying the same amount per employee as she did last year. Using SHOP allows her workers to choose from a menu of insurance plans, depending on how much they want to contribute to the overall policy.

“We have one employee who’s a new mother, and she wanted more of a fuller package, and another employee who’s really young, right out of college,” she said. “So we could actually allow them to make a decision about how much they want to contribute, once they knew our company’s contribution to their plan.”

For herself and her family of four, Abbate chose a platinum plan through Health Republic. She estimates she is saving between $200 and $300 a month over Oxford.

New York will need a lot more like her to reach its goal of 450,000 people insured through the SHOP exchange by 2016.