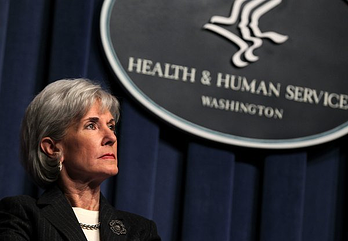 Sebelius, a former Kansas governor and insurance commissioner, was an early supporter of Obama’s, endorsing him during his hard-fought Democratic primary campaign against Hillary Rodham Clinton. The president turned to her to run the massive federal agency after his first choice for the job, former Sen. Tom Daschle, ran into confirmation problems. Sebelius became the face of the administration’s relentless campaign to reform the country’s health care system, appearing regularly before Capitol Hill panels and traveling the country seeking to win converts to the effort. But she also became the face of the health law’s troubled rollout last October when the federal online insurance marketplace, healthcare.gov, suffered numerous technological problems that stymied enrollments and frustrated millions of potential customers. The administration eventually had to call in technology experts, who spent more than a month working around the clock to retool the site, which was relaunched in early December.

Obama has chosen Sylvia Mathews Burwell, his budget director, to replace Sebelius, the White House said. Well-known inside Washington, where her appointment was praised by the likes of Republican Senator John McCain, Burwell will have to manage the program through its next major challenges in the height of elections season.

Polls show Obamacare remains unpopular. In March, 46 percent of people said they had an unfavorable view of the law, while 38 percent said they liked it, according to the Kaiser Family Foundation.