Doctors Are Avoiding Meaningful Use 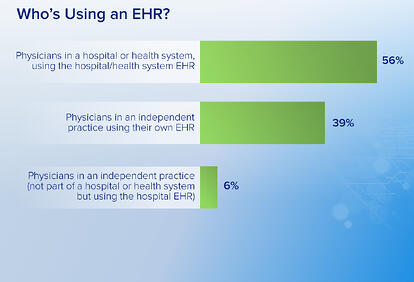 A recent survey of more than 18,500 physicians finds that 22 percent of them are opting out of or disregarding altogether the meaningful use electronic health records program.

Conducted by Medscape, a unit of WebMD, the survey was designed to gauge current EHR use among physicians across 25 specialties. “The results give an eye-opening portrait of how EHRs are affecting medical practices,” states Medscape, which offers a variety of medical information content to physicians and other healthcare professionals.

Among its findings, the survey reveals that 16 percent of doctors say they will never attest to meaningful use requirements--up 2 percent from Medscape’s 2012 survey--while another 6 percent of participants indicate that they are abandoning MU after meeting the requirements in previous years.

The American Medical Association argues that the way to keep doctors from dropping out of MU and to dissuade them from making the decision to not participate is to make the program criteria more flexible. AMA has sent a letter to CMS and the Office of the National Coordinator for Health IT warning that if significant changes are not made to the MU program, more physicians--already struggling with the first two stages--will drop out of the program or be unable to move to Stage 3.