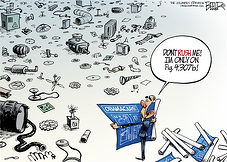 However, the President did set some rules for his policy shift. The President stipulated that if carriers do renew, they must disclose the shortfall between the benefits of their existing plan and benefits required under the PP-ACA. They must also notify consumers and point out that they may find other options and subsidies through the online marketplace. And finally, if you aren’t already covered by a non-compliant plan, you can not buy a policy now.

This does not mean that all cancelled plans will now be offered again, for that decision inevitably falls on the insurance company and state regulators – neither the White House nor the Department of Heath and Human Services can force extension of plans. Already state regulators are objecting to Obama’s proposal. Washington State Insurance Commissioner Mike Kreidler said he would not allow insurers to extend the policies “in the interest of keeping the consumer protections we have enacted.” Extending subpar plans could “undermine the new market and may lead to higher premiums,” said Jim Donelon, president of the National Association of Insurance Commissioners. This is because these policies were typically sold to a generally healthier group of individuals. Insurers, when pricing policies for 2014, based their cost model on the assumption that everybody would have to be in the new market, and there is concern the costs will be much higher on the exchange if only older and unhealthy people enroll in the new plans.   Consumers should check with their insurer to see if they will be renewing. Consumers should remember that only insurance sold through the marketplaces comes with the possibility of a government subsidy.

Consumers covered by Medicaid, Medicare or large employers are unaffected.