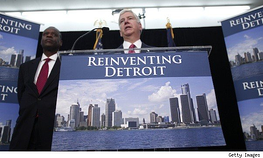 The settlement provides the following additional benefits to the coverage plans the city announced in early January:

■  Retirees under 65 with annual household income of less than $75,000 will get a $175 per month stipend to buy health care coverage. Another option would allow those under 65 to receive a $100-discount on coverage from a new city-sponsored health care plan instead of the stipend. The new health care plan is unrelated to Detroit VEBA, a health care trust to manage retiree insurance benefits that is described in a draft of the city’s plan of adjustment.

■  A retiree’s spouse who is not eligible for Medicare and purchases coverage under the exchanges created by the Affordable Care Act will receive a $125 stipend if the retiree’s annual household income is less than $75,000.

■  For Medicare-eligible retirees enrolled in one of the city-sponsored Medicare Advantage Plans, certain “catastrophic” out-of-pocket drug costs, which have not yet been specified, will be reimbursed.

Additional information can be found through the DFP.